The anime will premiere on January 8 at 10:00 p.m. JST on Tokyo MX and BS11, before airing on Sun TV and AT-X. The series will stream on Abema and other services.

Crunchyroll will stream the anime as it airs in Japan. The company premiered the first episode at the Anime NYC 2021 event on November 19.

The main cast members are: 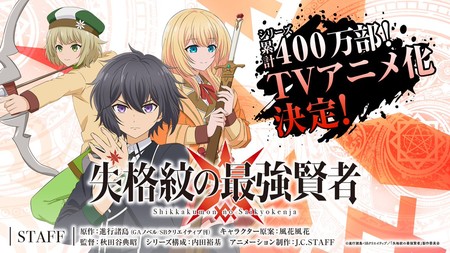 Noriaki Akitaya is directing the anime at J.C. Staff, and Hiroki Uchida is supervising the series scripts.

The duo fripSide is performing the opening theme song “Leap of faith.”

Square Enix Manga & Books is publishing the manga adaptation by LIVER JAM&POPO (Friendly Land), and it describes the story:

His strength limited by the magical crest with which he was born, Mathias, the world’s most powerful sage, decides reincarnation is necessary to become the strongest of all. Upon his rebirth as a young boy, Mathias is thrilled to discover he’s been born with the optimal crest for magical combat on his first try! Unfortunately, the world he’s been born into has abysmally poor standards when it comes to magic, and everyone thinks he’s still marked for failure! Now it’s up to Mathias to prove everyone wrong…world’s strongest sage-style!

Shinkoshoto launched the story on the Shōsetsu ni Narō! website, and SB Creative‘s GA Novel imprint began publishing the story with illustrations by Huuka Kazabana in 2016. LIVER JAM&POPO launched the manga adaptation in 2017.

The anime series is getting a smartphone game titled Shikkaku Mon no Saikyō Kenja: The Ultimate Reincarnation. The iOS and Android game will be free-to-play with optional in-game purchases.