When a certain, specific moment of pop culture becomes prominent enough, be it a line of dialogue or a kind of plot twist or even a particularly notable visual, it ingrains itself in our collective experience. We are able to recognize it, even if we’ve never seen it in its original form. It’s become a part of our language, a way we express ourselves through art. As you probably guessed, the moment I’m talking about now is Goku going Super Saiyan for the first time in Dragon Ball Z.

There are plenty of aspects of Dragon Ball Z that have become famous over time. For a while, its existence basically served as anime shorthand in North America. Something like Pokemon one could watch in the late ’90s as a piece of a wider franchising effort, but Dragon Ball Z could never be divorced from its anime and manga roots. And its popularity was such that, for many, it WAS anime. Goku would be the lead character by which all other leads in the medium were judged, and the series itself would be a prime reference point as more and more of it trickled into the American mainstream. 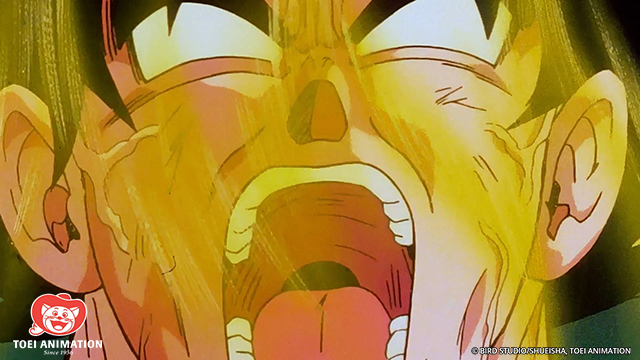 All images via Funimation

Dragon Ball Z is full of plenty of upgrades, power-ups, and feats of increased strength. It’s kind of become the series’ calling card, as, despite their efforts, few other narratives have ever based themselves around combat in the same way Dragon Ball Z does. There’s a sense of ultimate glory to it, one that lacks any sort of self-awareness. For characters like Goku, Vegeta, and others, the pursuit of strength is eternal and death in combat is almost inevitable. It’s an oddly beautiful warrior ethos if you become invested in it.

Going Super Saiyan became the representative of it, both a major sequence in the storyline and a definition for all those unaware. “They’re going Super Saiyan” is, in 2021, a general anime phrase for “They’re getting really passionate and really strong.” You can see it applied everywhere due to its succinct and recognizable nature. Never mind that its initial occurrence in the anime happens mostly due to Goku’s rage at seeing Krillin killed and Piccolo maimed by Frieza. Its extreme visual iconography means that, with the hair going blonde and the muscles getting pumped up, you can translate it anywhere and people will understand, whether the context is homage or simple parody. 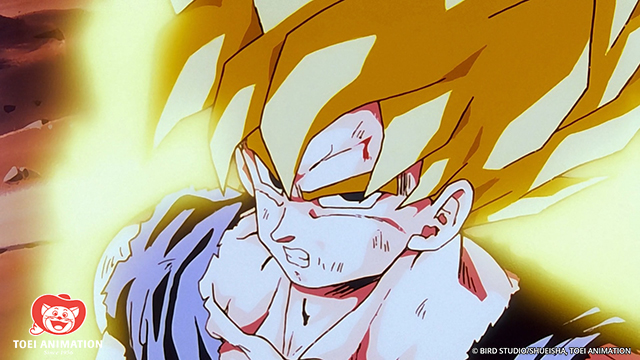 For Dragon Ball Z, it became an emotional barometer of sorts, a counterbalance to any alienating kind of ridiculousness inherent in the series’ other upgrades. Until this point, power-ups often feel loose and singular based on the character obtaining them. With Super Saiyan, there becomes a shared struggle, one that relates characters to one another and prevents it from being The Goku Show. Vegeta is initially haunted by it, as it embodies every insecurity he has about not only not being the strongest out there but the possibility that he may never be. The fact that Goku and Future Trunks can achieve this form looms over him for a while, complicating his intentions of domination and destiny.

Gohan’s transformations into Super Saiyan 1 and 2 serve as a source of fascination and pride for his father and a complication for the character himself. Gohan’s path as a fighter is a source of interest for fans, mainly because of the push-pull between Gohan’s own dreams of living up to the heroic expectations of his family/friends and the pursuit of his goals to be a scholar. As such, his part in the battle against Cell, perhaps Gohan’s most famous contribution in the series thus far, serves as both a great “What if?” and a “What could’ve been,” to the extent that seeing his mere inclusion on the poster for Dragon Ball Super: Super Hero in a battle stance is enough to pique people’s interests. 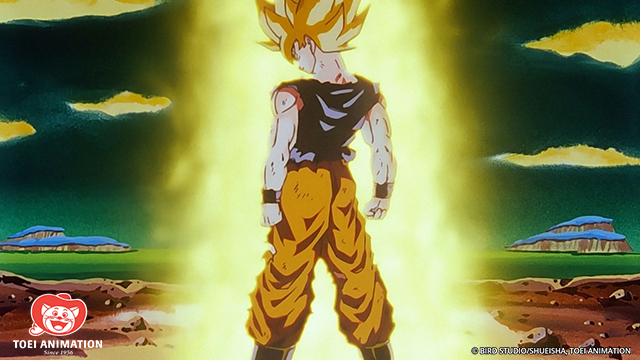 All of this serves to create an upgrade that’s almost as famous as Dragon Ball Z itself. When Goku turned into his Super Saiyan form and is able to win the fight against the tyrant Frieza, he was making manga, and eventually, anime history. In the years since, it’s been the subject of loving tribute, mild reference, and derisive mockery, all while serving as a backbone for the power system of the Dragon Ball franchise. Like the Saiyan performing it, it’s become more than just a simple event, but a testimony of the potential of Dragon Ball Z itself.