The official website for the live-action film of Toshio Sako‘s Usogui (The Lie Eater) manga unveiled a new poster visual and a new trailer for the film on Friday. The trailer reveals and previews the film’s theme song “Live” by B’z, and also reveals the film’s February 11 premiere date. 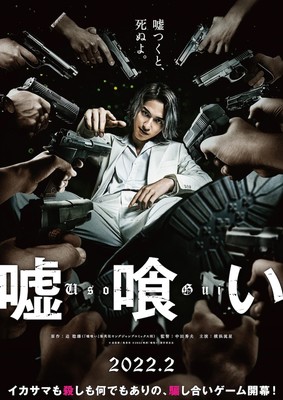 The live-action film was announced in 2016.

The story of Usogui follows a brilliant gambler named Baku “Usogui” Madarame as he lays down his life as the wager for various games.

Sako began the Usogui manga in 2006, and ended it in December 2017. The manga has 49 volumes. Sako launched a spinoff manga titled Usogui -Rikkainin Yakō Hikoichi- (The Lie Eater: Referree Hikoichi Yakō) in Weekly Young Jump on October 7, and ended it on November 25. The main manga inspired an original video animation (OVA) bundled with the manga’s 26th volume in 2012.