The official website for the second season of the the live-action television series of Naru Narumi‘s Ms. Koizumi loves ramen noodles (Ramen Daisuki Koizumi-san) manga revealed on Sunday that the show is getting a New Year’s special that will air on January 8 from 2:45 to 3:55 p.m.

The new special takes place in summer 2020, when many high school students endured canceled field trips and school festivals due to COVID-19. The special will center on the thoughts of high school students enduring the crisis, and the thoughts of ramen shop owners who continue to make their ramen despite the circumstances. The show will star the same cast as the second season, but will add Rio Komiya to the cast as Hayato, a young man who busks in front of the local train station every day.

The second season premiered on Fuji TV in March 2020, and featured an all-new cast for the main characters. Akari Hayami, who played Koizumi in the previous season and specials, appeared in the second season but in a different role. The second season’s main cast includes Ririka Tanabe as Misa Nakamura, Hiyori Sakurada as Koizumi, Manami Igashira as Yū Ōsawa, and Ayaka Imoto as Jun Takahashi.

The previous live-action television series premiered in 2015, followed by a New Year’s Special in January 2016, a New Year’s Eve Special in December 2016, and another special in April 2019. 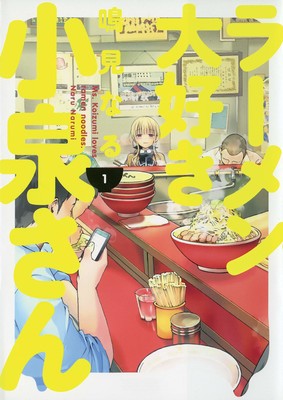 Dark Horse Comics has licensed the manga, and it describes the story:

Let cool, mysterious high school student Ms. Koizumi and her girlfriends show you around the authentic ramen culture of everyday Japan in this fun food manga. The noodles, the toppings, the broth–the street stalls, restaurants, and home cooking…and yes, cup ramen too! You’ll slurp down a whole new knowledge of Japan’s greatest fast food that even many Japanese don’t know…but Ms. Koizumi does!

Narumi launched the manga in Takeshobo‘s Manga Life Storia magazine in 2013. The manga inspired a television anime that premiered in January 2018. Crunchyroll streamed the series as it aired in Japan.