The January 2022 issue of Kadokawa‘s Monthly Dragon Age magazine revealed on Thursday that Tsumumi will launch a manga spinoff of Hiro Ainana and shri‘s Death March to the Parallel World Rhapsody (Death March Kara Hajimaru Isekai Kyōsōkyoku) light novel series in the magazine’s next issue on January 8. The manga is titled Death March kara Hajimaru Isekai Kōfukukyoku (Death March to the Parallel World Music for Happy Stomachs), and will be a gourmet manga spinoff centering on the Phantom Chef Lulu. 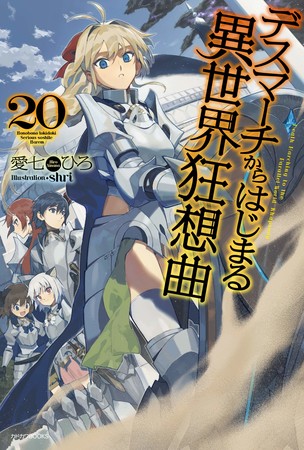 The story of the original light novel series follows a 29-year-old programmer who is on a “death march,” but one day he wakes up in another world after a nap. From a meteor shower he happens to gain vast riches, and he decides to go sightseeing. So begins his “heartwarming, occasionally serious, and harem” adventure in another world.

Ainana launched the series online on the Shōsetsuka ni Narō (“Let’s Be Novelists”) website in 2013, and Kadokawa published the first volume with illustrations by shri in in March 2014. The 23rd volume of the novel series shipped on July 9. Ainana ended the web novel series in March 2020, but Ainana has continued to write side stories online. The print novels will have a different ending than the web novels.

A television anime adaptation of the novels premiered in January 2018, and ended with its 12th episode in March 2018. Crunchyroll streamed the series with English subtitles, while Funimation streamed an English dub.