There’s nothing quite as aggravating as having to suffer through a bad comedy. There’s a good reason that all of the classic works of So-Bad-It’s-Good Trash Art were sincere attempts to be sincerely dramatic, entertaining, thrilling, romantic, or what have you. Tommy Wiseau can go on and on about how he intended to make a “dark comedy”, but there is no rational human being on this Earth that would ever see The Room and mistake it for anything other than the deeply personal reckoning of a remarkably strange soul. Ed Wood probably didn’t think Plan 9 from Outer Space was going to be a masterpiece or anything, but he definitely thought it was good enough to charge money for. For God’s sake, Tom Hooper convinced many wealthy and respectable professionals to lend their time, money, and good names to his adaptation of Cats. We laugh at these glorious failures because of the comically gargantuan gulf that divides their misplaced confidence with their ability to…well, to do anything right.

Except for comedies. You see, when a movie or a show or whatever has the intention to make its audience laugh, then the only possible result of its failure is the gut-churning silence of the damned, a sonic black hole from which not even the tiniest whimper of joy can escape. A lot of you youngsters probably can’t even remember the deluge of “________ Movie” spoofs that wreaked havoc upon the world back in the mid-2000s, and I hope you’re falling to your knees every night and thanking whichever deity or abstract universal force you believe in for that, because I wouldn’t wish those steaming piles of garbage on my worst enemies. The worst comedies are not merely artistic failures or commercial disasters; they are exercises in psychic torture that demand their victims find solace in the dying screams their body’s individual cells as each of them dies off, one by one, with every passing moment.

Is this week’s episode of The Fruit of Evolution as bad as all of that? In a certain sense, no, because the show’s one saving grace is that its episodes are barely over twenty minutes long. It has to work four times as hard to inflict the irreversible spiritual mutilation that a single shitty spoof movie can manage, and The Fruit of Evolution is way too lazy and inept to accomplish anything so impressive. On the other hand, “The Calamity Bride” might be even more offensive than its competition, because at least none of the awful Scary Movie sequels ever tried to convince me to give a damn about their idiot characters and nonsense stories. Can you believe that, this week, the show had the gall to devote almost half of its runtime to Seiichi’s fight against the Black Dragon God? This show, of all the anime in the world, wants to be taken seriously.

The Fruit of Evolution can hardly be bothered to draw a single decent frame of animation when its characters are just farting around in empty fields and cracking stupid jokes, and now we’re supposed watch a whole action sequence where Seiichi is meant to be some legitimate action hero. Later, when the guy bumbles his way into accidentally proposing to Artoria with a magic ring that will reverse her catastrophically low -2,000,000 luck stat, the chintzy music and serious framing make it pretty clear that, dumb proposal joke or no, Seiichi is meant to be cool.

I have only three words to say to The Fruit of Evolution: How dare you? How dare you attempt to pull the wool over our eyes and paper over the crusty grease-stained core of this screeching farce? How dare you try, for even one single scene, to pretend that you aren’t tediously unfunny isekai trash whose destiny lies in the bargain bins of 3rd-rate used-DVD shops the world over? Seiichi Hiiragi is not cool. He is, by virtue of his fundamental nature, incapable of even approaching the liminal space that the abstract “concept” of cool occupies in any given language.

In my first draft of this review, I named him “The Mark Zuckerberg of Anime Characters”. The truth is even worse, though. You know “that one guy” on Twitter, the completely unmemorable white wannabe tech-bro who spends inordinate amounts of his free time defending Facebook in any news thread that dares to criticize the Zuck’s monstrous impact on all of human society? The guy who probably spends half of his monthly paycheck on Rick and Morty NFTs and cryptocurrency named after TikTok memes?

Seiichi is the “That One Guy” of anime characters. There. I said it.

Now, you might be thinking that these reviews are becoming completely divorced from any sense or reason, but what would you prefer? That I talk about what happened in the rest of the episode? Yeah, I think not. Nobody here wants to hear my nuanced criticism of the pointless running joke where Seiichi keeps killing monsters with sad backstories, and you definitely don’t want to hear my inane conspiracy theories about the goofy ogre trio and their board games. No, I’m pretty sure y’all voted for The Fruit of Evolution because you wanted…whatever this is.

I’ll tell you what, though. The minute that The Fruit of Evolution becomes a real, honest-to-God show, I’ll be more than happy to give it a real, honest-to-God score. If Seiichi’s antics can make me laugh even one time, or even crack so much as a twisted rictus of defeat, then I may very well concede. Until then, it seems rude to ignore the perfect slam-dunks that the show itself keeps handing me every single week. 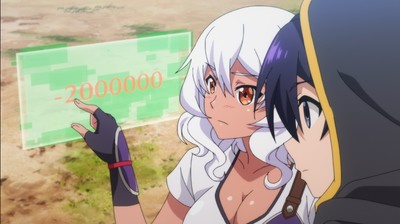 The Fruit of Evolution: Before I Knew It, My Life Had It Made is currently streaming on
Crunchyroll.

James is a writer with many thoughts and feelings about anime and other pop-culture, which can also be found on Twitter, his blog, and his podcast.