TOHO Visual Entertainment began streaming a trailer for the sequel to the live-action Touken Ranbu film on Thursday, and the video reveals the film’s November 23 premiere.

Stage shot photo cards will be distributed to theatergoers during the first three weeks. Four different cards featuring different characters will be available each week.

The sequel film will be based on the first stage play Touken Ranbu Kyoden: Moyuru Honnōji, which originally ran in 2016.

Keita Ikeda is directing the film. Stage play director Kenichi Suemitsu is handling the screenplay, production, and supervision for the film. Teruji Yoshizawa and manzo are composing the music. 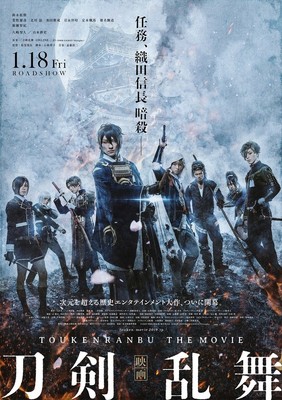 The Touken Ranbu franchise‘s first live-action film opened in Japan in January 2019.
Saiji Yakumo (live-action Mars) directed the film, with a script by Yasuko Kobayashi (Attack on Titan, JoJo’s Bizarre Adventure, Kakegurui). The film ranked at #5 in its opening weekend.

The “sword personification training game” takes famous swords from Japanese history and interprets them as bishōnen. Nitroplus designed the characters and scenario. The game launched in Japan in January 2015. The franchise has inspired the Katsugeki: Touken Ranbu television anime series and an upcoming anime film, as well as the Touken Ranbu: Hanamaru spinoff’s two anime series, an upcoming anime film trilogy, and a compilation anime film. The franchise has also inspired a series of stage musicals and a series of stage plays, as well as various manga. The ninth musical in the series will run in Aichi, Osaka, and Tokyo between January and March 2022. Johren released the original Touken Ranbu browser game in English on April 27, and released the smartphone version of the game as well on August 31.