The official website for the two-part stage play production based on Akimi Yoshida‘s Banana Fish manga revealed on Friday visuals of the cast in costume, including the first photos of Ray Fujita as Blanca and Masashi Taniguchi as Eduardo L. Fox.

The second stage play will run at the Shinagawa Prince Hotel’s Stella Ball from January 20 to February 6, 2022. 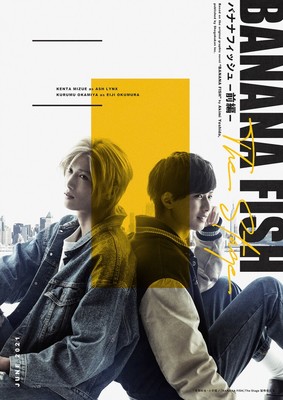 Fumiya Matsuzaki is directing the production, and Fumi Hatamasa is writing the script. Yasuhiro Itō is composing the music.

The first stage play ran in Tokyo at The Galaxy Theatre from June 10-20 last year.

Viz Media published the manga in English, and it describes the story:

Vice City: New York in the 80s… Nature made Ash Lynx beautiful; nurture made him a cold ruthless killer. A child runaway brought up as the adopted heir, hatchet man, and sex toy of “Papa” Dino Golzine, the East Coast’s Corsican crime lord, Ash is now at the rebellious age of seventeen – forsaking the kingdom of power and riches held out by the devil who raised him, preferring a code he can live with among a small but loyal gang of street thugs. But his “Papa” can’t simply let him go – not when the hideous secret that drove Ash’s older brother mad in Vietnam has suddenly fallen into his insatiably ambitious hands.

It’s exactly the wrong time for Eiji Okamura, a pure-hearted young photographer from Japan, to arrive in NYC and make Ash Lynx’s acquaintance… and fall with him into the bloody whirlpool of pride, greed, lust and wrath unleashed by the enigma code-named Banana Fish…

The manga inspired a television anime series that premiered in July 2018. The anime aired for two cours (two quarters of a year) in length, with 24 episodes, and adapted the entire manga to the end, changing only the setting to the modern day. The anime takes place in modern day New York, instead of in the 1980s when the original manga took place. Amazon Prime Video streamed the series with English subtitles.

The manga ran in Shogakukan‘s Bessatsu Shōjo Comic magazine from 1985 to 1994. Shogakukan published the manga in 19 volumes in Japan, and then reissued the manga in 11 volumes (plus a side-story volume). The series has more than 11 million copies in print.