The strong bond between Asuna and Mito is at the forefront of the newest Japanese trailer for the upcoming Sword Art Online The Movie -Progressive- Aria of a Starless Night anime film, which opens in Japanese theaters on October 30. It was further announced that the anime film and its characters will be heading to the town of Mito, Ibaraki, for a city-wide collaboration.

In a perfect naming collaboration, Sword Art Online will be taking over the town of Mito from October 29 to December 26. The anime franchise will be collaborating with local cafes to have special SAO-themed items, hotels will be setting up SAO-themed rooms, and the characters will be appearing at Mito Station with town announcements from Inori Minase in character as Mito. Goods and special items, such as “Sword Natto Online,” will be available throughout the city. 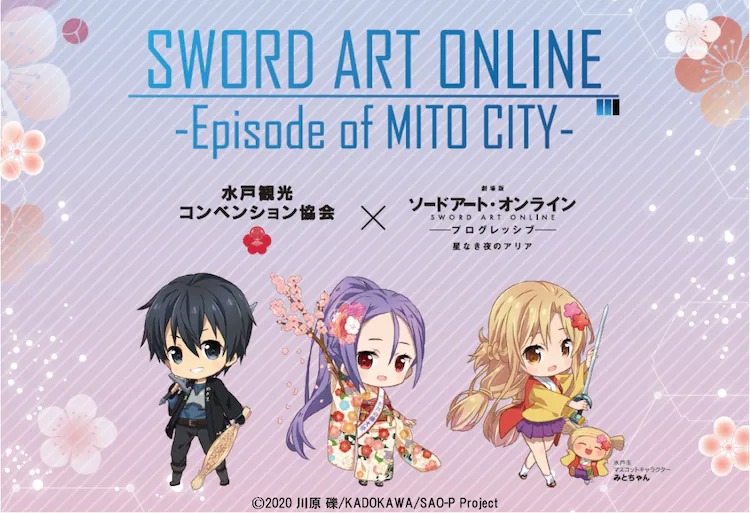 Sword Art Online The Movie -Progressive- Aria of a Starless Night opens in Japan on October 30, with the film heading internationally on December 3 from Funimation and Aniplex. They describe the film as such:

The day that she happened to don the NerveGear, Asuna Yuuki was a third-year middle school student who’d never even touched an online game before.

On November 6, 2022, the world’s first VRMMORPG, Sword Art Online, is officially launched. But the players, still euphoric over having logged in, suddenly find themselves trapped inside the game when the Game Master deprives them of any way to log out.

The Game Master then gives them this warning “This may be a game, but it’s not something you play.” If a player dies in-game, they die in the real world.

Hearing this, all of the players panic, and pandemonium reigns.

One of those players is Asuna, but despite not yet knowing the rules of this world, she sets off to conquer the floating iron castle, Aincrad, whose peak is too high to be seen.

As the days go by in this world where death is never very far away, she has a fateful encounter. And then, a parting…

Though she’s at the mercy of the reality before her eyes, Asuna fights on with all her might, until someone appears before her: the aloof swordsman, Kirito…