Following a father and daughter’s journey through an uncharted and hostile underground labyrinth, the anime SAKUGAN combines a gritty science-fiction setting, utilitarian yet charming mech designs, and a deeply human tale of love, loss, and family. ANN spoke to director Junichi Wada, producer Takayuki Funahashi, mecha designer Stanislas Brunet, kaiju designer Shoji Kawamori, and Memempu’s voice actress Kanon Amane to get some insight into the nuts and bolts of this highly ambitious production.

What are the primary themes of Sakugan?

How did you emphasize the father-daughter relationship between Gagumber and Memempu?

Junichi Wada: It’s emphasized even in the first episode that Gagumber and Memempu don’t trust each other. I feel like you can’t easily boil their relationship down to simple concepts like a father watching over his daughter, or a daughter admiring her father. They’re two very individual personalities. Nevertheless, what does it mean to be parent and child? I think that’s where I put my focus.

What do you think separates Sakugan from other robot anime?

Junichi Wada: I see the protagonist mech, Big Tony, more as a character than as a weapon. As a personal challenge, we asked the Satelight Team, which had made all kinds of sharp and cool robot shows like Macross and Aquarion, to make “action unlike a typical Satelight production.” The robots have a griminess to them that is different from Kawamori’s usual works.

What attracted you to the story of Sakugan?

Takayuki Funahashi: “The parent-child bond.” Gagumber is a single father, and he’s usually very unreliable, but he does everything he can to protect his nine-year-old daughter Memempu. When I was chosen for this project, I remember feeling very sad about a news story of a father killing his daughter through abuse. A lot happens to Gagumber and Memempu over the course of this project, and I think part of the appeal is the strong depiction of Gagumber’s feelings, that he values his daughter’s life as much as, if not more than, his own.

What do you think separates Sakugan from other robot anime?

Takayuki Funahashi: Lots of other robot anime are designed around the protagonist robots fighting the enemy robots. Sakugan features two main type of mechs, “work bots” and “mark bots,” but work bots just dig up ore and such, while mark bots adventure into the unknown region known as the labyrinth. So it’s not a setting that presupposes interpersonal combat. Because of this, when discussing merchandising for the show, we were actually asked “couldn’t you put more weapons on it?”

What do you feel is the best aspect of Sakugan overall?

Takayuki Funahashi: I’d love to say “all of it!” but since I’m a producer on the industry side, to me the best aspect of Sakugan is the worldsetting. Rock-covered residential zones known as colonies, and dangerous expansive unknown regions outside them known as the labyrinth. The colony that appears in the first episode is the Asian-inspired “Pinyin,” and in the future other colonies evoking other countries and regions will appear. And the markers who travel from colony to colony tell tales of a colony with a huge treasure stash, or a legendary colony nobody’s ever reached. As the viewers join Memempu and Gagumber on their journey, I hope they imagine their own new colonies and labyrinths, and think of which ones they’d like to visit themselves. Then I hope they send us their ideas! 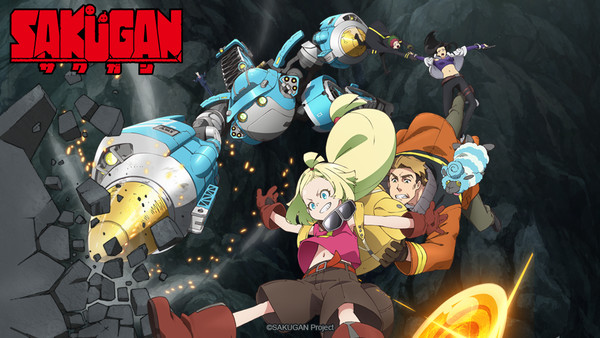 What is the origin of the mecha in Sakugan and what were they originally invented to do?

Stanislas Brunet: I started the mecha design work on Sakugan with “Big Tony”, the main robot. Mr. Wada, with whom I had worked a bit on the Shūmatsu Nani Shitemasu ka? project, came up with a pretty good idea of what we should be looking for. The robot was to be both a construction machine and an exploration vehicle capable of making long journeys. But it was also necessary to make it an endearing character.

Are there any shared design elements across all the mecha in Sakugan? If so, what are they and why did you choose to incorporate them?

Stanislas Brunet: The universe of Sakugan is completely underground. Roads are tracks and vehicles must be able to cross rough terrain. This is why I immediately thought about adding caterpillars on the robots, like a bulldozer or a tank.

The vehicles also had to have powerful headlights to navigate the dark caves. More generally the style of the designs should be retro-futuristic, and I wanted to give them a raw and functional aspect.

What is your favorite mecha design for the anime and why?

Stanislas Brunet: Overall, I am very satisfied of all the designs in the series, but I must admit that my favorite is Big Tony. Obviously, I spent more time on it than on the others. Also, making such a balanced design while adding a transformation was not an easy task.

With its chunky proportions and its big backpack, its two round headlights/eyes, it has a cute appearance. Yet we feel his strength in the forearms, and the caterpillars legs suggest a certain speed. The spectrum of what this design makes you feel is wider than the others. That’s probably why this is my favorite.

I would nevertheless make a small mention of Zackletu’s motorcycle. It is a less complex design but the mash-up motorcycle/farm tractor was funny to make!

You’re quite well known for your mecha designs. How do your years of mecha design help you to create Kaiju in Sakugan?

Shoji Kawamori: These days I get a lot of work with mecha, but when I started my career forty years ago drawing fighter planes and robots, I also drew enemy monsters, kaiju, and even tools like hammers and set squares. So I’ve enjoyed revisiting those old feelings from the start of my career. I drew a lot of enemy monsters in my Toushi Gordian and Gold Lightan days also. But the big difference from back then is the prominence of CG animation nowadays. Since I’m designing for CG rather than hand drawing, and I’ve had ten or twenty years of CG mecha experience, I’m conscious of how to add features to the silhouette, or include just the right amount of detail.

What is your design process when creating a new Kaiju? Can you walk us through the process?

Shoji Kawamori: I first got the request from Satelight‘s producer Takano. I was also a judge in the Project ANIMA contest that led to Sakugan getting an anime adaptation, so of course I knew all about it. I also read the concept material and thought it was a very interesting and unique concept, so I really enjoyed taking part in the anime.

After getting the request, Director Wada would give me an order, I’d design a rough draft, and we’d go back and forth a whole lot. Director Wada wasn’t quite sure what he wanted the kaiju to look like at first either, so I’d submit a lot of concepts, and Director Wada would say “this one is good,” or “would it be better if it were a bit more like this?” and we’d discuss it over and over again. Director Wada and I kept submitting ideas and discussing like that for several months, as we gradually got it to take shape.

What is your favorite kaiju design for Sakugan and why?

My favorite designs are the ones that appear in episodes 1 and 2. I think they’re the CG models that are closest to my concept art. I was very conscious of silhouette and shapes that pop in digital designs.

How would you describe Memempu? Is she a ‘futuristic’ girl or very similar to modern girls?

Kanon Amane: I think spiritually she’s very old-fashioned. The sound director told me “she’s a child, but play her like a child samurai.” I hope Memempu’s “edokko” spirit comes through!

What are your thoughts on Memempu’s relationship with her father?

Kanon Amane:At first glance she looks like a prodigy supporting her layabout dad, but the way Memempu pursues the path she believes in and Gagumber tries to stop her out of fatherly concern, is a bit like a parent dealing with a child in her “terrible twos.” I think Memempu can act out the way she does because she trusts Gagumber as her father to always give her a place to come home to. I feel like they’ve established a perfect balance.

What is the hardest aspect of portraying Memempu?

Kanon Amane: The fact that she’s nine years old, but is a genius who’s graduated college. She’s very smart, but she’s still nine years old. She might intellectually understand things, so she goes between seeming very adult and being mentally nine, and that discrepancy was very hard to portray.

SAKUGAN is currently streaming on Crunchyroll